From 2000 to 2013, Daniel Constantineau teaches theory, history, computer music and choral singing to students of Arts and Letters at Cégep de Valleyfield. Alongside the major disciplines of theater, movie, visual arts or literature that form this course, the music – a « minor » profile which disappeared in 2013 following an overhaul done by the Ministère de l’éducation, des loisirs et des sports du Québec – nevertheless allows to some of his students to carve a place in universities or a career in music.

The notes lying underneath are the foundations of this course. They borrow material from multiple authors and sources and propose a synthetic approach of the 4th art. The chapter of the book Exploration et pratique musicale I, devoted to music analysis focuses on the in-depth study of the forms of pop song, the poor relation of a field where scholarly however not lacking. 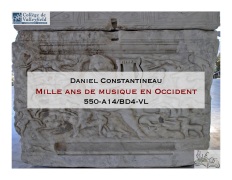 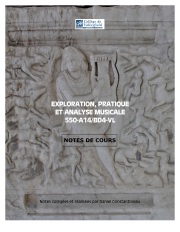 For its part, the analysis of the Stravinsky’s ballet Petrushka is a witness of the efforts that Daniel Constantineau has invested in the theory area when he himself was a student at the Music Conservatory of Montreal. Judged by Serge Garant, Jacques Hétu, Donald Harris and Andre Bédard, the thesis allowed him to get its Masters with the greatest honours, in 1982. 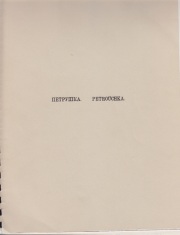